Here is another set play from former Arkansas Little Rock Head Coach Chris Beard. Beard will begin his first season as head coach of the Texas Tech Red Raiders in 2016-2017. The Texas native has coached at several programs in the state and was a student at the University of Texas. Beard was the head coach at McMurry and Angelo State, both Division II programs in Texas, and was the head coach at Division 1 Arkansas Little Rock during the 2015-2016 season. At Angelo State, he went 47-15 in two seasons including a 28-6 record in 2014-2015. In his past three seasons, Beard is a combined 77-20 and has only 11 losses in his past two seasons. Beard is just one of a few new coaches in the Big 12 this season. Brad Underwood took over at Oklahoma State after being at Stephen F. Austin and Jamie Dixon made the move from Pittsburgh to Texas Christian.

The Trojans used this play last season against Texas State in San Marcos, Texas in Sun Belt Conference play. The play starts with 2 and 3 exchanging wings with 3 screening for 2 in the lane. 1 passes to 2 on the left wing and then spaces to the right. 5 and 4 start at the elbow and once 2 has the ball each step out as if to set a staggered ball screen for 2 to attack middle. 5 slips the first screen trying to catch the defense sleeping for an easy layup. 2 has to look at the slip quick but if it isn’t there he continues on the ball screen from 4. 2 can hit either post option or pass out to 3 or 1 on the perimeter for a shot. 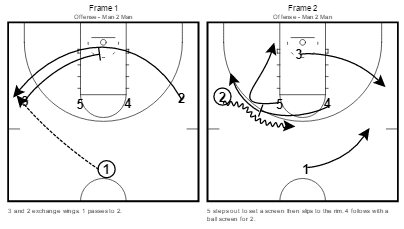