Cheryl Reeve is the current head basketball coach for the WNBA’s Minnesota Lynx team. Coach Reeve began her coaching career in the WNBA with the Charlotte Sting in 2001 as an assistant coach. Charlotte was able to turn things around in Reeve’s first season on the coaching staff with a 10-game improvement record. She also served as an assistant coach on the Detroit Shock team from 2006 to 2009 before accepting her current head coaching role with Minnesota Lynx. Prior to joining the WNBA, Reeve served as head coach at Indiana State in Terre Haute, Indiana from 1995-1999. She improved the team’s record each season, and led the squad to its first postseason berth in 20 years following the 1998-1999 campaign. Reeve also spent five seasons as an assistant coach at George Washington University. The Colonials posted five 20-win seasons, captured three Atlantic 10 Conference Championships and appeared in four NCAA tournaments during Reeve’s stint at George Washington.

In her six seasons as a head coach in the WNBA she has compiled a record of 140-64 with 4 trips to the WNBA finals. Coach Reeve’s teams won the WNBA championship in ears 2011, 2013 and 2015. Her Minnesota teams have has 4+ straight seasons of 25 or more wins during her tenure as head coach. Reeve is currently the winningest coach in franchise history, both in terms of victories and winning percentage, and by percentage the winningest coach in WNBA history. She won her 100th regular season game on June 2, 2014, in a victory over the San Antonio Stars. 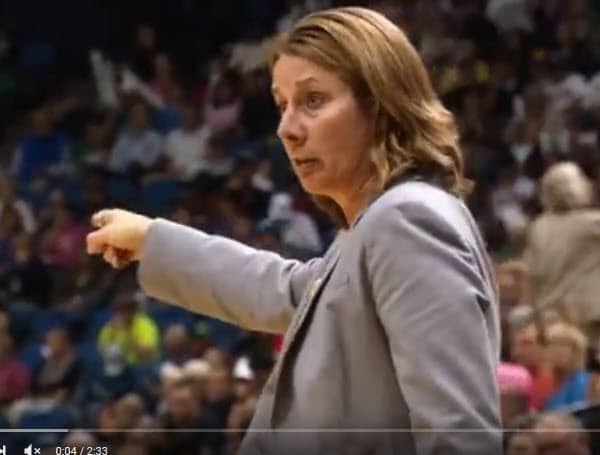 In a recent clinic, She spoke about the Cheryl Reeve Corner Offense that she has been able to implement with her teams at Minnesota. Many of these concepts have been and are being utilised by just about all NBA teams. This Cheryl Reeve Corner Offense is essentially the triangle offense with an open post. The corner offense was made famous in the NBA by Rick Adelman while coaching the Sacramento Kings in the early 2000’s with Chris Webber, Mike Bibby and Vlade Divac at its core.

Attached diagrams show the basic structure of the Cheryl Reeve Corner Offense, its alignment with simple entries and counters. The offense is a read and react offense and requires all five players to be able to make reads, pivot and pass. This is a fundamentally sound offense that enables smaller teams with no real post presence to be able to generate high percentage shots in their offense by having all 5 players involved at all times. It’s strong side pin down + dribble hand-off action combined with its weak side flare screening action is the staple of this offense and when executed properly – it is tough action to defend against.

Coach Reeve demonstrates that in this simple offense, there is always a counter for every adjustment the defense makes. For example, back cut & relace action is a counter move which should be drilled to bigs playing this position as defense will attempt to take away the high post entry. Other counters are also demonstrated in these diagrams.