Here is another great play from Chapman University Assistant Coach Dan Krikorian. Krikorian has been the assistant since the 2013-2014 season and played at Chapman where he graduated in 2007. This play is compact in the middle of the floor but has several scoring options. Put your best screener at the 4 position as he is going to be setting screen the entire set. 5 needs to be a good passer to make the back door pass to 1 or the flare pass to 2 cutting to the right wing. If you want to take a good defender out of the play, you can put that offensive player he is guarding in the 3 spot as he doesn’t do much in this set.

This play starts in a diamond set with 3 under the basket, 2 at the top of the key, and 4 and 5 at the high posts. The play starts with a high post entry to 5 and 3 cutting out to the wing. 1 then cuts off of a staggered back screen from 2 and 4. If 1 isn’t open, 5 looks to pass to 4 setting a back screen for 2 to flare to the right wing. If 2 gets the ball without a shot opportunity, he looks to pass to 5 cutting to the block after a back screen from 1. Lastly, 4 screens down for 1 in the lane for a shot at the top of the key.

A counter option for this play is to have 2 screen down for 4 after the staggered back screen (Figure 1) instead of 4 setting the flare screen. This option could continue the same way with 2 cutting out to the wing, but first open up a possible shot for 4 on the perimeter. 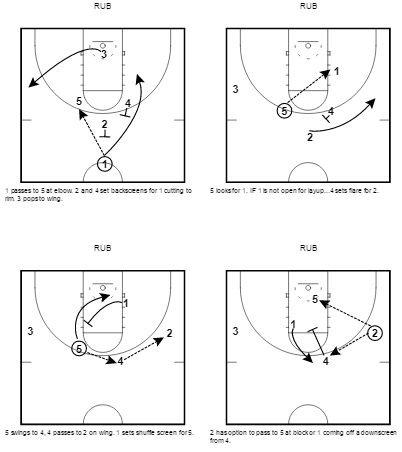