The best rivalry in sports is back! Two of the college basketball’s most storied programs, Duke v Carolina (round 1) tipped off on Wednesday night in Cameron Indoor Stadium. The game was well-hyped as Duke, with all of its young talents, came into the game ranked #1 and North Carolina ranked #8. However, the game turned out to be a blowout…literally. One possession into the game, likely #1 overall draft pick in the 2019 NBA Draft, Zion Williamson blew out his shoe, causing a leg injury that forced him to leave the game. He did not return. The Tar Heels took full advantage of the shocked and short-handed Blue Devils and ran away with the game 88-72, one of the biggest losses at home Coach K has ever had.

The Tar Heels were able to “run” to a big lead and away with the game is due to their Carolina secondary break. Going back to Dean Smith, North Carolina has always prided itself on its high tempo, aggressive offensive break. First, the Carolina secondary break looking to outrun their opponent (on a make or a miss) for early opportunities. Then, seamlessly transitioning into their famed secondary break, developed by Smith. Each player has assigned running lanes to run. They look to advance the ball ahead with the pass looking for a numbers advantage. Their first look is to always get the ball to the rim; most often times throwing the ball into the post for the rim-running big. If Carolina does not have numbers, they will look to reverse the ball and flow into a secondary action. It is a read-based system, that is predicated by where the ball is passed. They have a variety of options that they can use as counters to the defense or get the ball to a particular player. Most options first look is to get the ball to the post, and play inside-out basketball. While Roy Williams’ team this year is more perimeter-oriented and less post dominant, the Carolina secondary break is as relevant and successful as it was when Dean Smith first began running it.

← Prev: Hammer Action by Chris Filios Next: Flow your Offense by Zach Weir → 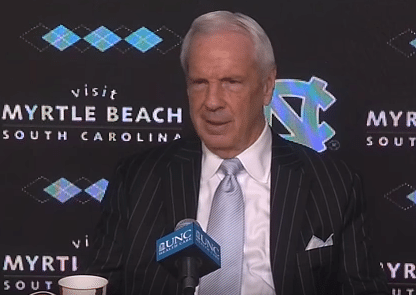 WNBA Early Offense by Layton Westmoreland Basketball in its purest form is when five players are playing together to...

Roy Williams North Carolina Tar Heels Secondary Break & Set Plays by Dana Beszczynski Who is the guy that hit the...