Here is a play used by Brad Stevens at Butler to get an open lob at the rim. We used a variation of this play at Colorado College, and it really works well if you have a 4 man who is athletic (or put your most athletic player at the 4 spot in the play). The “Butler Action” as we called it was basically a pitch by the point guard to the trail man followed by a drag and pass/back screen for the 4. Often, we were able to get a lob on the play so we didn’t need to continue, but the play can keep going with a staggered screen for the point guard. This play can also be a great way to get the ball to 4 posting up inside if the lob isn’t open.

The play starts with 5 on the left block, 3 and 2 in the corner, and 4 and 1 in the slots. 1 passes to 4 and cuts around a back screen from 5 at the high post. 4 takes a dribble or two to the right and passes to 2 lifting up to the wing. The momentum of the dribble brings x4 towards the middle of the floor, and on the pass 4 cuts around 5 looking for a lob pass form 2 at the basket. If the lob isn’t there, 4 holds his man off as the ball is reversed to the left wing. Once 3 has the ball, 5 and 2 set a staggered screen for 1 inside. You can also run a variation where 1 clears out on the initial cut and the staggered screen is then set in the corner instead of 1 starting on the block. 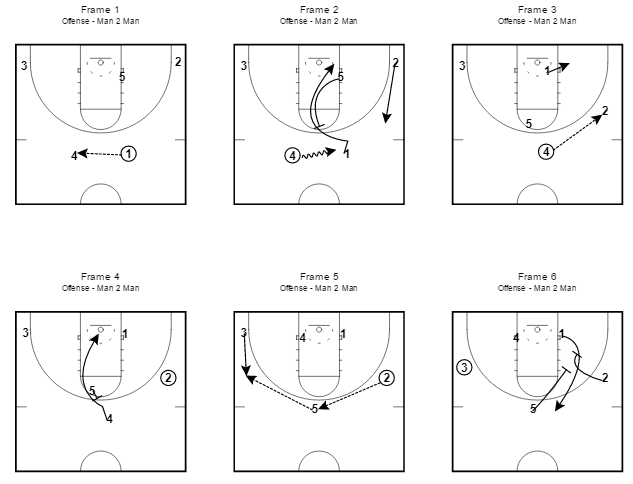