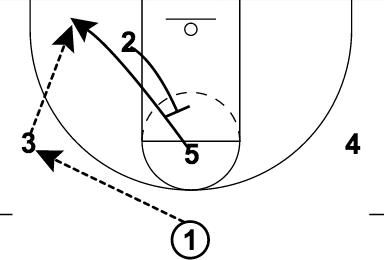 Today I bring you a set play for 3 I have utilized to open up shooters during my first two seasons as a varsity head coach, and it was founded via the Butler Bulldogs and their 2003 NCAA Tournament Cinderella Sweet 16 run which included upset victories over 5 seeded Mississippi State and Rick Pitino’s 4 seeded Louisville Cardinals. Butler Coach Todd Lickliter that season had a stable of high level guard play and perimeter shooting with Darnell Archey, Mike Monserez and former Butler Head Coach Brandon Miller, alongside capable big Joel Cornette and swing man Duane Lightfoot. Darnell Archey served with Brad Stevens on Butler’s coaching staff before leaving to join fellow Butler assistant coach Matthew Graves in his new gig at South Alabama. Coach Lickliter road the hot hand of Darnell Archey and the other Bulldog guards to a Cinderella Sweet 16 run by utilizing set plays and floor spacing such as the set you see here.

Coach Lickliter began his coaching career in the high school ranks before moving on to Community College, Eastern Michigan, and eventually head coaching stints at Butler, Iowa, and most recently Marian(Ind.). Coach Lickliter is just yet another successful piece of the puzzle that is the basketball brilliance of the Butler Way, and the Butler Brand of basketball. The casual fan has come to recognize the Bulldogs as a house hold name thanks in part to Coach Brad Stevens and the Bulldogs magical 2010 and 2011 Final Four runs, but most true basketball people know that the Butler Bulldogs have been excelling on and off the court long before America’s favorite mascot Blue II and the Bulldogs captured the hearts of America during those two magical seasons. This set play is just a small blimp on the radar in terms of the tactile excellence that goes hand in hand when a student of the game studies the Butler brand of basketball. This play can be utilized to get your shooters a good look for a 3 on an every game basis, or to simply be tucked away in memory for that moment you need some “Hinkle Magic.”

Kyle Pertuset began being involved within the coaching profession at a very young age, the 2005 Minford, Ohio Graduate began as a 7th and 8th grader assisting with the Minford Biddy Basketball program in his hometown. Directly after high school Pertuset began assisting in the Jr. High Boys’ program at Minford Local Schools while coaching his first season of AAU Basketball with the Southern Ohio Magic. During the summer of 2009 Pertuset was hired as 7th Grade Head Boys’ Basketball Coach at Minford Middle School and Head 8th Grade Coach the year prior. During his tenure as Jr. High Boys’ Coach he also served as an assistant on the varsity level under former Minford Head Coach Kyle Copley who worked under Hall of Fame Women’s Basketball Coach, Robin Hagen-Smith at Shawnee State University. Pertuset also worked under current Minford Head Boys’ Coach Josh Shoemaker who was a Minford Alumnus. While Pertuset was at Minford the Falcons made a trip to the District Semi-Finals. In the spring of 2010, Pertuset was hired by Jeff Lisath to be the Head Jr. High Boys’ Coach at Piketon high school, 2 seasons following the varsity programs’ state final four appearance. Pertuset also volunteered and assisted at the varsity level at Piketon, and was a part of 2 district tournament appearances, a district championship, and one regional semi-final appearance. Pertuset has a combined 4 years of AAU Basketball experience working for both the Southern Ohio Magic and South Central Rebels, where he coached aged groups varying from 8th grade student-athletes all the way to the varsity level. Pertuset is currently the Boys’ Varsity Head Coach at Lucas High School in Richland County, Ohio where he is heading up the rebuilding process, during the spring, Pertuset also currently works for the Ohio Rebels Elite AAU program out of Mansfield, Ohio.