Coach Frese made an amazing turnaround when she transformed the University of Maryland into a NCAA Championship Team. The Brenda Frese Maryland Terrapins Shooting Drills will teach concepts that she has developed over the course of her career. These Brenda Frese Maryland Terrapins Shooting Drills not only impove shooting and footwork, they are great conditioners. Spot shooting shows the basic fundamentals of passing, footwork, and repetitive shooting. Active shooting drills add movement, shooting stance and conditioning. These Brenda Frese Maryland Terrapins Shooting Drills can get you a lot of shots in a short period of time. To mix up the drill, 3 point shots and shots off one more dribble can be implemented. Frese thinks that free throw shooting with penalities can be added to the drills. These drills can be run individually or with partners or as a team.

Good Shooting is necessary when using position breakdown drills based on offensive sets and competitive team drills. Coach Frese will show you how to get your team working together to hit shots from all angles and distances withing time constraints.

Coach Frese believes in breaking her offensive into shooting drills for both guards and posts. The Posts work on Sikma moves at the low post and scoring moves from the high post. The guards work on post feeds and scoring actions after the pass, such as direct cuts and corner action. These drills will help our team develop shots after using side ball screens, while the posts workin on scoring against looks on rolls or pops 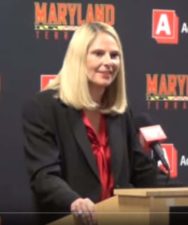