The Brad Underwood SFA Lumberjacks are going to face the Bob Huggins West Virginia Mountaineers in the NCAA Tournament. Coach Brad Underwood grew up in the state of Kansas, played in Kansas, and coached in Kansas. Some of the KSU Alum are trying to start a “Bring Back Brad” campaign. There isn’t an opening with Kansas State right now, but most alums feel that Brad Underwood would have a HUGE chance at success at Kansas State.

The Brad Underwood SFA Lumberjacks are on a nation leading 20-0 run going into the NCAA Tournament, but they are still hungry in their match-up with West Virginia. SFA comes in as a Number 14 seed while the Mountaineers are the Number 3 seed. This is the fourth time in program history SFA has made it into this postseason run. They’ve now gone for three years straight.

It’s hard to understand Brad Underwood’s rise to the top if you don’t undertand his journey. He started at Dodge City Community college, and led the school to a 62-60 record. After five years at Dodge City, Coach Underwood joined the staff of Jim Kerwin, former Kansas State Assistant, at Western Illinois. He did ten years as an assistant to Coach Kerwin, the decision to move to Daytona Beach Community College was a success. After three years at Daytona Beach, Coach Brad Underwood help lead them to three consecutive seasons of 20 wins and two conference championships. The day came where Coach Underwood and his family got the offer to join Bob Huggins at Kansas State, but with a twist. Underwood took the job at Kansas State in an administrative role just to be closer to home and have the opportunity to one day coach at a school he was so passionate about. 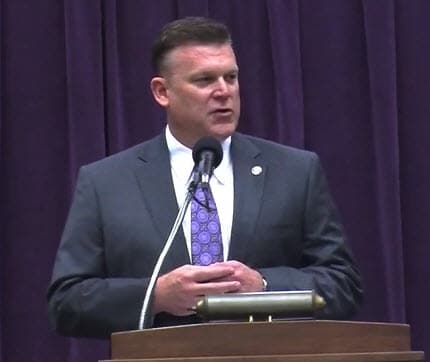 In 2005, Coach Brad Underwood became the director of operations for none other than Bob “Huggy Bear” Huggins. After Bob Huggins left for West Virgina, Underwood was offered an assistant coaching job by Frank Martin. Hard work and decidation were adjectives used about Coach Underwood. He was key in the development of players like Jacob Pullen, helping coach the team to the best school record in 2009-2010 with 29 wins, to adjusting the offensive scheme that would help turn the team around in 2010-11, Brad Underwood was an asset to Kansas State.

When Frank Martin left for South Carolina, Coach Underwood went with him. The duo of Frank Martin and Brad Underwood gained a top 40 recruiting class nationally and moved the team in a positive direction. Twenty five years into his college coaching career, Brad Underwood got the chance to be a head coach at Stephen F. Austin which is a Division 1 program. Stephen F. Austin and Coach Underwood had a overall record of 84–13 (.866) and a conference record of 51-1 (.981) accomplished in the three short years he has been in charge.

SFA might be in the Southland conference and not the Big 12, but you have to be impressed with his run there and the ability to lead a team from this conference in back to back NCAA tournament appearances, looking like a third to happen this year.