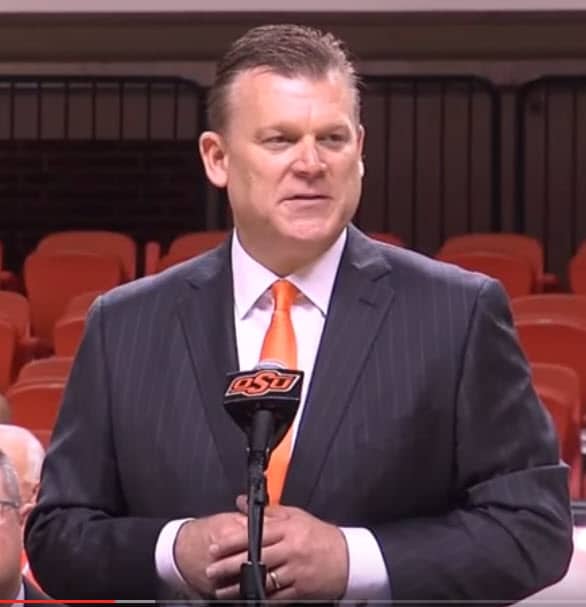 Brad Underwood loves to play pressure defense to distrupt the other team.  He is also trying to get the OSU “Sixth Man” back in Gallagher-Iba Arena like in the Eddie Sutton Era.  That “Sixth Man” won tons of games for them back in the 80’s and 90’s.

Oklahoma State University men’s basketball home attendance dropped by more than 2000 fans during the last 12-20 season. The OSU Cowboys dropped from 10,397 to the 7,897 the season before that one. That is one reason that Travis Ford is no longer the OSU Cowboys head coach.

Coach Underwood is out in towns across Oklahoma to win back those fans. It’s important for him to meet the fans in their backyard. He told the media in Enid, Oklahoma on monday that they have to reach out and touch the fans. If coaches are asking people to come to their venue or envent then it’s time that the coaches go out in their community and meet them.

The OSU Cowboys are going to be all about relationships and getting to know the great fans of Oklahoma State again. Gallagher-Iba needs to be the rowdiest area in America for them to be successful.

During my life-time, Gallagher-Iba has went from the loudest area to very non-inimidating and Coach Underwood wants that to change. He is going to be with fraternities, sororities and the rest of the student body to build interest. He wants them to get to know us and their players. It doesn’t happen overnight, but the fans are going to be HUGE in helping them win in the future.

Underwood has been pleased with the returning OSU cowboys and their new recruits since he was hired away from Stephen F. Austin. The OSU freshmen reported on June 6 for summer off-season training.
[optin-monster-shortcode id=”rhpskaiyvcqo6rei”]

The OSU Cowboys just agreed to a home and home series with Wichita State with the Cowboys going to the downtown 15,004-seat Intrust Arena on Dec. 17 and the Shockers coming to Gallagher-Iba on Dec. 9, 2017. It’s something that the coaches are very excited about. It’s a game that makes sense for their fans.

Underwood played and coached for Jack Hartman — who starred in both football and basketball — at then Oklahoma A&M. Taking the OSU Cowboys Head Job was an easy decision for Coach Underwood. They want to get the culture back to when Coach Iba and Eddie Sutton made it famous.