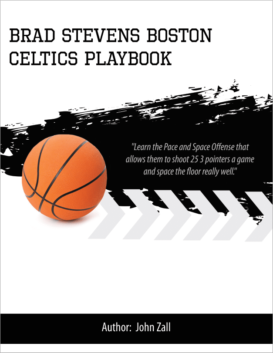 Brad Stevens seems to bring the magic touch to every team he coaches. He coached 6 successful seasons at Butler University that ended with an overall record of 166-49 and two trips to the NCAA National Championship Game. Unfortunately for Coach Stevens he came up empty handed in both title games, but was able to parlay his success at the small Indiana school into the Head Coaching job with the Boston Celtics.

After Brad guided a young and inexperienced team during his first year as Head Coach of the Celtics, he found his rhythm during his second year at the helm. The Celtics played some of the best basketball in the league in the final few months and clinched the #7 seed in the 2015 Eastern Conference playoffs. Just like any team that Coach Stevens has ever coached, he maximizes the talent he has and has an ability to make complex sets seem simple. Coach Stevens is known for making his mark late in close games where he is known for his wizardry with a clipboard during timeouts.

Brad Stevens also revved up the offense in his second year at the helm, installing a “Pace and Space” offense. They got the Pace part down; the Celtics were 5th in the NBA averaging 98.40 possessions over 48 minutes according to NBA.com. The Celtics also do space the floor well and attempt almost 25 3-pointers per game. However, they make them at the 4th worst rate in the NBA; 32.7% from 3 per NBA.com. The floor spacing leads to ball movement and despite playing 22 different players this season the Celtics assisted on an impressive 62.9% of their field goals ranking them 4th in the entire NBA.

This Brad Stevens Boston Celtics Playbook  contains over 60 plays straight from the Boston Celtics offense. There are separate sections for out-of-bounds plays and those end-of-game sets that Coach Stevens is known for. Every team that Brad Stevens coaches executes brilliantly and all of his most complicated sets are broken down so you can run them with your own team. Hope you enjoy!