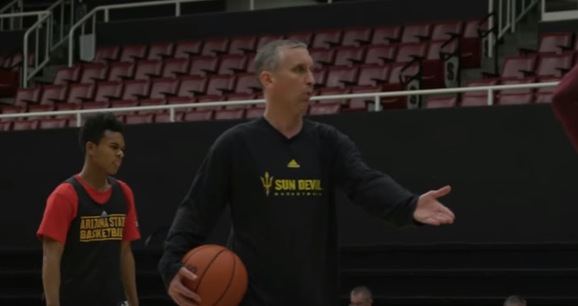 Here is a baseline out-of-bounds set play from Arizona State Sun Devils Head Coach Bobby Hurley. Hurley, the son of legendary high school coach Bob Hurley, was a star player at Duke under Coach Mike Krzyzewski and played in the NBA for the Sacramento Kings and Vancouver Grizzlies. As a player, Hurley was a 2-time NCAA Champion (1991 and 1992), the 1992 NCAA Final Four Most Outstanding Player, 1993 First-Team All-American, 1993 First-Team All-ACC, and the 1989 McDonald’s All-American MVP in high school. As a coach, he got his first head coaching job at Buffalo in 2013 and led the Bulls to back-to-back east division 1st place finishes in the Mid-American Conference. His 2014-2015 Bulls made it to the NCAA Tournament and finished 23-10 on the season.

This is a simple screen the screener action baseline out-of-bounds play from Coach Hurley.1 starts with the ball out of bounds and the rest of the team is in a box formation (4 and 5 on the blocks and 2 and 3 on the elbows). The play begins with 4 cutting diagonal across and up the lane to set a back screen for 2. 2 makes a hard cut to the rim looking to pull x4 over to help protect the basket. If x4 doesn’t help and x2 gets caught on the screen, 1 makes the simple pass to 2 for a layup. If x4 does help, 5 screens for 4 who cuts out to the wing or short corner for a shot. In the video, 5 forces x4 to cut all the way around him at the 3-point line and x5 stays in the lane leaving 4 wide open in the corner. 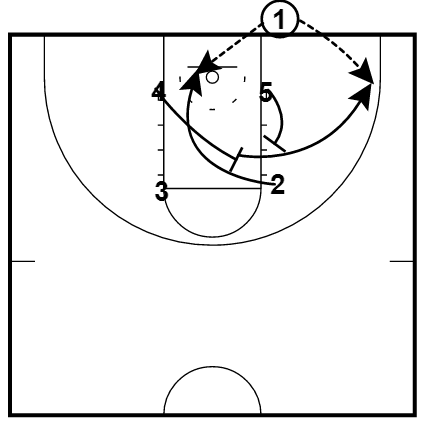