Attached are two set plays from Louisiana Lafayette Head Coach Bob Marlin. Marlin is in his 18th season as a head coach and 6th season at Louisiana Lafayette. In the first five years with the Ragin Cajuns, Marlin turned a 14 win team into a 20+ win program in the past two seasons.  The Ragin Cajuns won the Sun Belt Tournament Championship in 2014, and Marlin has won several awards and championships in the Southland Conference when he was with Sam Houston State. Marlin got his coaching start at Northeast Louisiana as an assistant in 1982. He then was an assistant at Houston Baptist and Marshall before taking the head coaching job at Pensacola Junior College in 1990. After that, he was an assistant at Alabama until 1998. He then took the head coaching job at Sam Houston State. In 12 years with Sam Houston State, he compiled a 225-131 record including a 25-8 record in his last season in 2009-2010.

1 passes to 5 stepping out to the perimeter from the elbow in a horns set. 5 faces the basket and looks to shoot or drive. 1 then screens down for 4 who cuts around the screen looking for a shot.

1 dribbles to the left wing as 3 runs the baseline to the opposite corner. As 3 clears the post, 5 loops around and uses 3 running by as a screen and posts up. 1 looks to pass inside to 5. If 5 isn’t open, he steps out to the wing and sets a ball-screen for 1. 1 drives middle as 4 cuts to the rim and opposite corner. If 1 can’t turn the corner, he passes to 2. 2 can look to shoot or pass to 5 rolling to the basket. 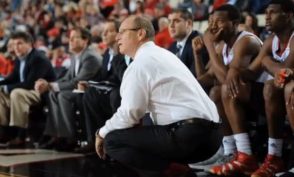