This seasons edition of the Mountaineers is athletic, quick and long. Huggins hasn’t had a team like this in some quite sometime and expectations are rising after a good early season win against the likes of UCONN.

West Virginia ran this play out of Transition looking to get their 2 man Miles Jr. a look at a quick hit in the lane for a lay-up or as is in this instance, a jumper coming off the elbow pin down screen in the lane.

Huggins team will be fun to watch this season and may be a “sleeper” team in the Big 12. The West Virginia Mountaineers have jumped into the Top 25 for the first time as a member of the Big 12, because of the win over UCONN. They had two transfers at the end of last season that put the West Virginia Mountaineers in a bad position of having to replace two of their top three scorers. The 5-0 start and #21 ranking might seem unexpected.

Coach Bob Huggins has tweaked his recruiting process and gotten some guys that can play defense. He got away from that in the past couple years. Coach Huggins is getting more offensively out of his current players right now too. Jawan Staten is someone that is starting to flourish this year as a point guard. Coach Huggins brought him game film from the days of Nick Van Excel and Steve Logan. Staten poured hours over those tapes. He wasn’t just studying their moves, but how the set plays aren’t that different than what they ran in the 90’s. Staten is learning the flow of the offense and when to attack.

It’s a great idea to do with your players and let them see where they could get opportunities to score in the offense. Staten now knows where to get his shots.

Coach Beszczynski brings over twenty years of basketball coaching experience to Men’s Basketball HoopScoop. To date, he has worked at all levels of basketball, from High School and from the Collegiate Ranks to the Professional level in Europe. As a leader, Coach Beszczynski emphasizes that his program is built on the principles of hard work, dedication, and no one person is more important than the team. Coach Beszczynski has a very diverse coaching background. He is known for his individual development of post players, scouting & film breakdown, motivation, and game preparation. 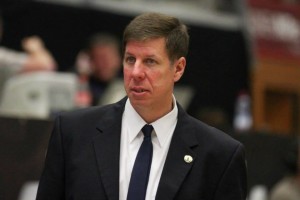