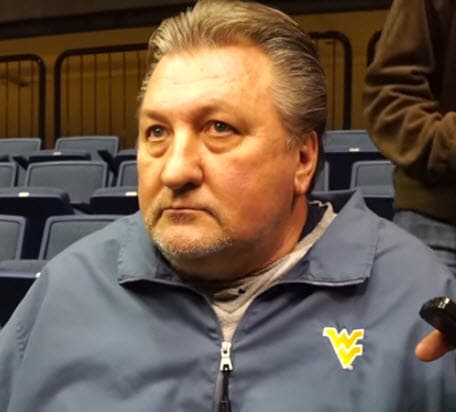 I think that you are going to love some of these favorite plays from the Bob Huggins West Virginia Mountaineers Offense. I was always told by Coach Bill Self that you couldn’t have a complicated offense and defense. You don’t have time in practice to get both in. That philosophy is something that stuck with me. Coach Huggins runs an offense that is easy to play and install. It’s based on hard cuts. Their press is complicated, so he makes sure that his offense is easy for the players to learn. Check out the Bob Huggins West Virginia Mountaineers Offense

Here is a little inside look at Bob Huggins:

Bob Huggins isn’t going to change one bit, and I love it. He is a hard cussing taskmaster that doesn’t mind telling you what he thinks, but his players love him. In the coaching circles, he is nicknamed “Huggy Bear.” It’s because he has a HUGE heart.

He doesn’t dress like your average college basketball coach in a suit and tie. He gave that up and wears a comfy pullover. He sits on a stool to help his aching hips instead of stalking the sidelines.

People that know him are very loyal to him. The guy is a basketball survivor. He left Cincinnati after 16 years, a Final Four, and two Elite Eights. He didn’t fade, but he grew larger. He went to Kansas State and put life in that program.

Players will have their manhood, heart, and courage tested in practice. Why would a player sign up for that? Most of his players have said that they see through it and take it for what it is. It makes them tougher and better. They know that he cares for them.

The treadmill is Bob Huggins’ wheel of torture for his player. They do 45 seconds at 15mph if they make a mistake. It is designed to help their player not repeat their mistakes. The point is that you want to stay off the treadmill and not make the same mistakes.

Coach Huggins believes in the three-hour practice and has enormous respect for defense. He can’t stand laziness. The only players that Coach Huggins can’t coach are the guys that don’t care. His assistants watch how a player interacts with his coaches and teammates and how he works in practice. It’s more important to them than how he performs in the game.

Coach Huggins will admit that his way isn’t for everyone. He has had a lot of players transfer away from him. Twelve players in a four-year period at West Virginia.

Coach Huggins might be extremely hard on his players, but they come back in droves to visit him. I have never heard a former player say a bad word about Huggins. They are fiercely loyal to him.

Bob Huggins sees himself as a truth teller in a profession that is filled with dishonest people. Jerry Tarkanian was a guy that he looks up to. He says Tark was the same guy one minute to the next minute. Not a lot of coaches in college basketball are like that.