Coach Billy Donovan is doing a great job with the OKC Thunder this 2016 NBA Play-off season. Coach Donovan is earning the trust of the OKC Thunder players as each play-off game passes. They are seeing the in game adjustments that he is making. Andre Roberson is one of his first adjustments. They are using Roberson as a screener to force his defender to help on the ball handler, and then he is able to attack the basket to force Green to help off Serge Ibaka which is opening up three point shots

Dion Waiters is gaining strength in his minutes as he has learned to trust Coach Billy Donovan. Waiters improved play in the playoffs, the OKC Thunder has a player now off the bench that can provide productive minutes on both sides of the court. This allows Donovan to unleash the Westbrook-Waiters-Roberson-Durant-Ibaka lineup that allows the OKC Thunder to space the floor, as three of the members are at least average outside shooters at thier position. This lineup has outscored the Warriors by 59.1 points per 100 possessions.

Billy Donovan inserted Waiters for Steven Adams during Game 3 early in each half, and the OKC Thunder went on to outscore the Warriors by a combined 16 points at the beginning of the two halves of play. Another strategy that Coach Donovan is using is a more conservative approach to the pick and roll. 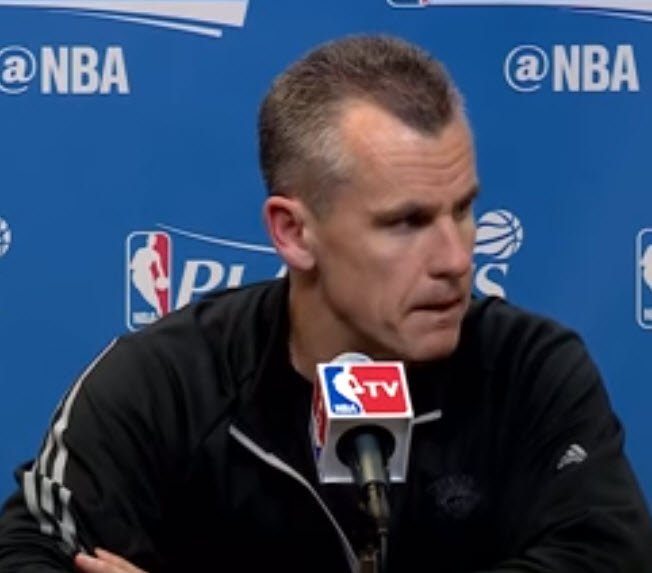 All these adjustments stems from something that the Donovan has countered with each move and it was something that he didn’t show in the regular season. All things considered, Billy Donovan has proved that he is a good NBA Coach, but like his players, coaches can improve over time. Billy Donovan is making adjustments to beat Rick Carlisle, Gregg Popovich and then Steve Kerr. He is proving to be a great choice for the OKC Thunder head coaching position.