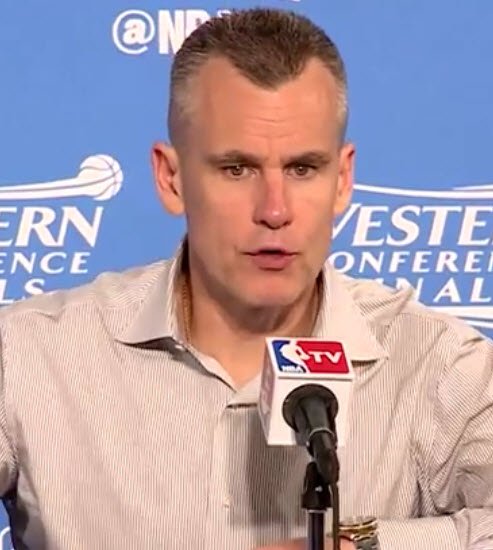 Billy Donovan just finished the San Antonio Spurs Series where the OKC Thunder embarrassed them. In Game 1, The Spurs beat the Thunder by 32 points, but that didn’t stop Billy Donovan. The Rookie NBA coach came back in the series and made the Guru look bad. Coach Donovan has spent time with Coach Popovich, before the season and picked his brain. Billy Donovan got some much needed respect from NBA peers by beating Gregg Popovich.

Donovan and the OKC Thunder vanquished Popovich and the Spurs last week with a Game 6 victory, making the Game 1 loss a distant memory and earning some respect for the rookie NBA coach.

The Billy Donovan OKC Thunder Crunch Time Plays basically show that the OKC Thunder were ready for anything that the Spurs threw at them. Coach Donovan did an unbelievable job of adjusting and growing, game in and game out.

Coach Donvoan used the regular season to adjust to the new environment. The basketball is different in the fact that the players are in different points of their lives, he learned how to calibrate his message, and get it to it’s essence.

The OKC Thunder won 55 games and produced 109.9 points per 100 possessions during the regular season, according to NBA.com, a figure second only to the 73-win Golden State Warriors’ 112.5.

Billy Donovan’s rotation management proved crucial considering that he used centers Steven Adams and Enes Kanter together for long stretches in every game after Game 1 to great effect. The Spurs had no answer to it.