In the Bill Self Kansas Jayhawks win over Oklahoma on Feb 13, the Kansas Jayhawks attempted 26 3 point field goals, tying a season high against NCAA Division 1 competitition. Across college basketball, 2 point field goals are at an all time low, with NCAA D1 team that attempt 35 percent of their field goals from beyond the arc. Today, the 3 Pointer accounts for a greater proportion of points since 2002.

When you look at the Bill Self Kansas Jayhawks, the 48 percent perimeter rate in their victory’s appears normal, but they are a little above their average these days. Bill Self has been the head coach of the Kansas Jayhawks for 13 season, so that same percentage might cause you to think twice.

Bill Self is one of the best coaches in the college game and he has coached the Kansas Jayhawks to 11 straight Big 12 regular season titles, won a NCAA title, and reached another Final Four and seen 13 players leave Kansas as NBA first round draft picks. 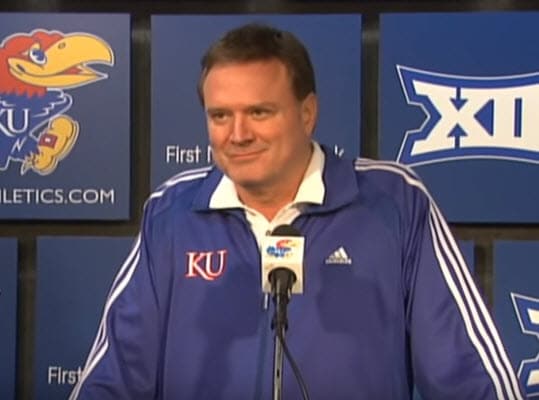 Usually the Bill Self Kansas Jayhawks prefers his offense to go through the Kansas Jayhawks Bigs, which means either high-lows between the power forwards and centers, big to big passing or inside-out game where you score 10 feet and in from the basket.

The Bill Self Kansas Jayhawks have turned loose the “faucet” on the three point attempts. Kansas ranks fourth nationally with 1.25 points scored per possession on those that end with a 3-point attempt, the most ever for a Self team.

I think that you will see Coach Bill Self let his players shoot more threes this year since they are so much better at that shot. You can’t ignore your strength.