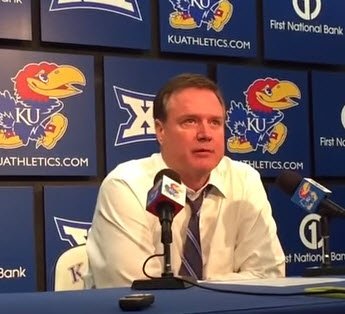 The Bill Self Kansas Jayhawks have just won the Big 12 conference championship for the 12th time in a row with the win over Texas Tech just minutes ago. In a year that the Big 12 is as competitive as it has ever been, Bill Self becam the first coach to win 12 straight regular season conference titles with the same team.

The Bill Self Kansas Jayhawks streak includes 13 five-star recruits (per 247 Sports), 19 NBA draft picks, two Final Fours and an NCAA tournament championship. The Kansas Jayhawks are now up there with other High Major teams like Duke, Kentucky and North Carolina as one of the elite programs in the country.

Bill Self’s recruiting classes have been good, but not like powerhouses Duke and Kentucky. Kansas gets top ten recruits, but they also get under-rated kids and coach them up. His teams have always showed development and balance. He has coached 20 point per game players like Wayne Simien in his first season and had a couple Final Four appearances come from players averaging double digit points and his championship run has come without a player ever taking more than 11 shots per game.

That’s a crazy stat right there if you think about it. Balance is something that they definitely have on their team.

Today, It was sophomore Svi Mykhailiuk who did the most of the work, coming off the bench to score 17 points by making all five of his attempts from three-point range. Frank Mason III added 15 points while Perry Ellis chipped in eight points to move the team to 25-4, 13-3 on the 2015-2016 basketball season.

I hope that you enjoy these basketball ball screen notes on the Bill Self Kansas Jayhawks.