UNI head coach Ben Jacobson has completed his ninth season at the helm of the Panther men’s basketball program and is the program’s all-time wins leader with 197.
In nine seasons at UNI, Jacobson has posted an overall record of 197-105 (.652 winning percentage). Jacobson has averaged 21.9 wins per season at UNI.

Jacobson guided UNI to a 31-4 record in the 2014-15 season, which included a school-record 16-game winning streak, an MVC Tournament title and the school’s first-ever top-10 national ranking. UNI finished the season ranked No. 14 in the final Coaches Top 25 poll. He led UNI to its fourth all-time NCAA Tournament victory with a 71-54 triumph over Wyoming in the second round. The 2014-15 season also saw UNI’s Seth Tuttle earned consensus second-team All-America honors. 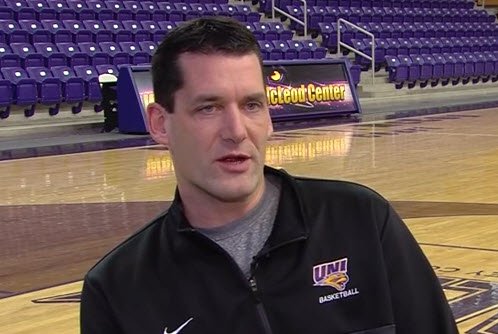 The Panthers have many players in their line-up who can play multiple positions and the University of Northern Iowa Shuffle Post Action (which also has a counter) is designed to get their 5 man Koch the ball inside.

The University of Northern Iowa Shuffle Post Action has quick hitting action with the DHO leading right into a shuffle cut backscreen action.

Well designed and really moves the defense to make a quick decision how to help due to Bohannon’s ability to knockdown the 3 pt shot stepping out at the TOK.
UNI runs one of the most exciting offensive packages in the country and although Ben Jacobsen is known for his strong defense, their offense should not be underestimated.

The University of Northern Iowa Shuffle Post Action just shows one example of what type of offense that the UNI staff runs. They have done in recruiting, coaching and preparing the players who went out and executed at the highest level against the nation’s top-ranked team is superb. Jacobson pointed to how he and his staff practice this group — like they have every other — so they would be ready for situations like they faced against UNC.