Gregg Popovich thinks that Becky Hammon is comparable to Steve Kerr and has the stuff to be an NBA Head Coach. Latest Spurs Set Plays inside! 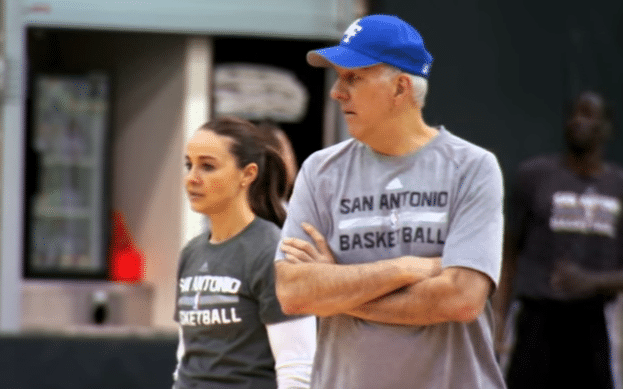 Do you think that Becky Hammon could be an NBA Head Coach? Latest NBA Spurs set plays for free inside!

NBA Commish Adam Silver thinks that the league will have a female head coach sooner than later. What do you say? The first name that comes to many people was Spurs assistant coach Becky Hammon who was hired in 2014 as the first full-time assistant coach in the NBA.

Becky Hammon served an internship the previous season while she attended practices and sat on the bench in games. Gregg Popovich feels very highly about her coaching acumen and believes that her phone will be ringing shortly.

Gregg Popovich says that she has the same natural feel for the game as Mike Budenholzer, Steve Kerr, and Avery Johnson. That’s pretty darn good company to be in.

He believes that she knows when to talk and when to keep her mouth shut. A lot of people don’t have that figured out.

Coach Hammon is working for one of the best basketball coaches of all time, and it’s ideal for her. Most of his assistant coaches stay a while under Pop before they venture out.

Mike Budenholzer was an assistant coach for Coach Popovich for 17 years before he took the Atlanta Hawks job. Brett Brown was his assistant for 12 years before taking the Philadelphia 76ers

Does Coach Popovich tell his assistant coaches to have patience? Does he make them learn their craft inside and out? Does he tell them to wait for a perfect situation for them? I think so.

It’s my opinion that Becky Hammon will be an NBA head coach, but it might be later than sooner.

← Prev: One of the best basketball games tonight is the Boston Celtics playing the Milwaukee Bucks! Next: Bruce Weber: Kansas State Basketball took a step forward this season. Clinic Notes inside! →