It’s down to 16 teams, with 8 playing on Thursday. On the left side of the bracket, there aren’t any huge surprises now that we are through a full weekend. There were several huge upsets: Hawaii taking down Cal, Wichita State over Arizona, Yale over Baylor, and UNI’s miraculous shot over Texas. However, this Thursday’s Sweet 16 games feature Two #1 seeds, two #2 seeds, two #3 seeds, one #4 seed, and one #5 seed. 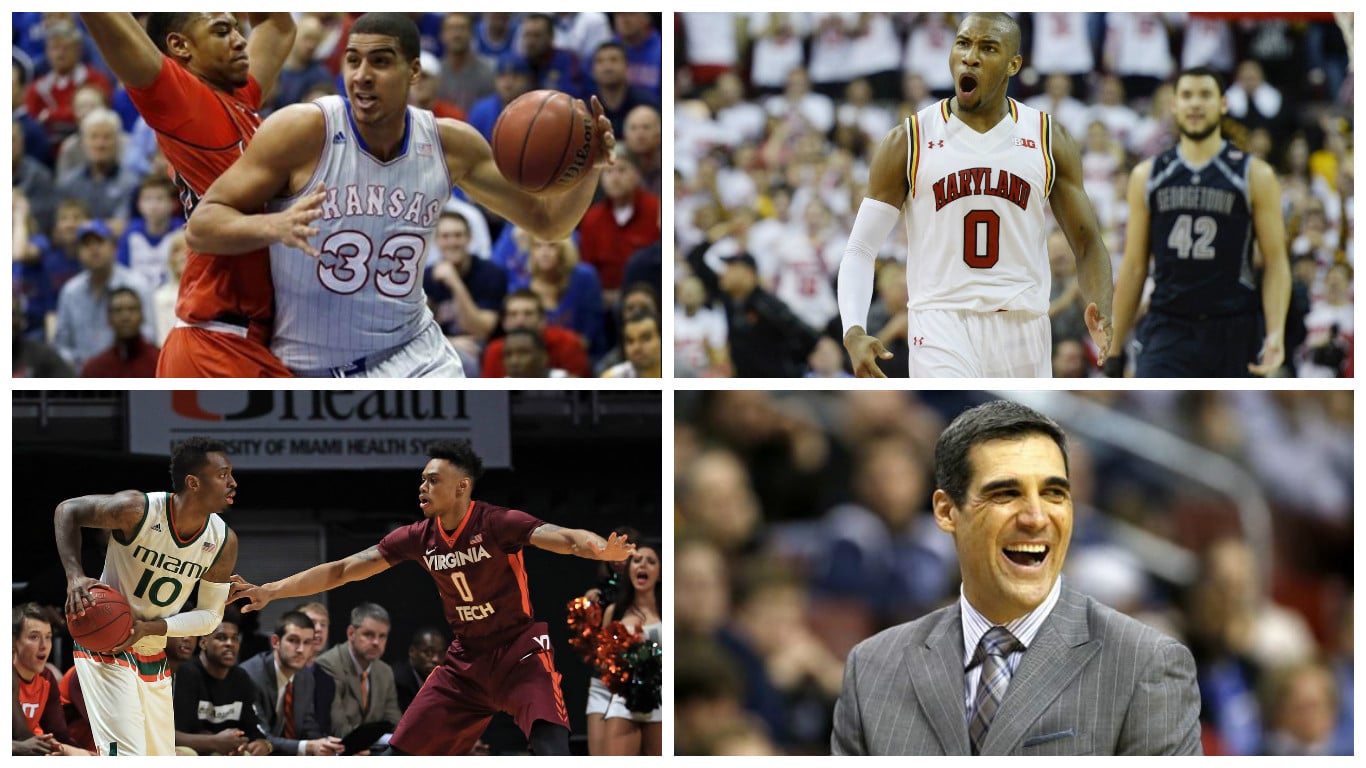 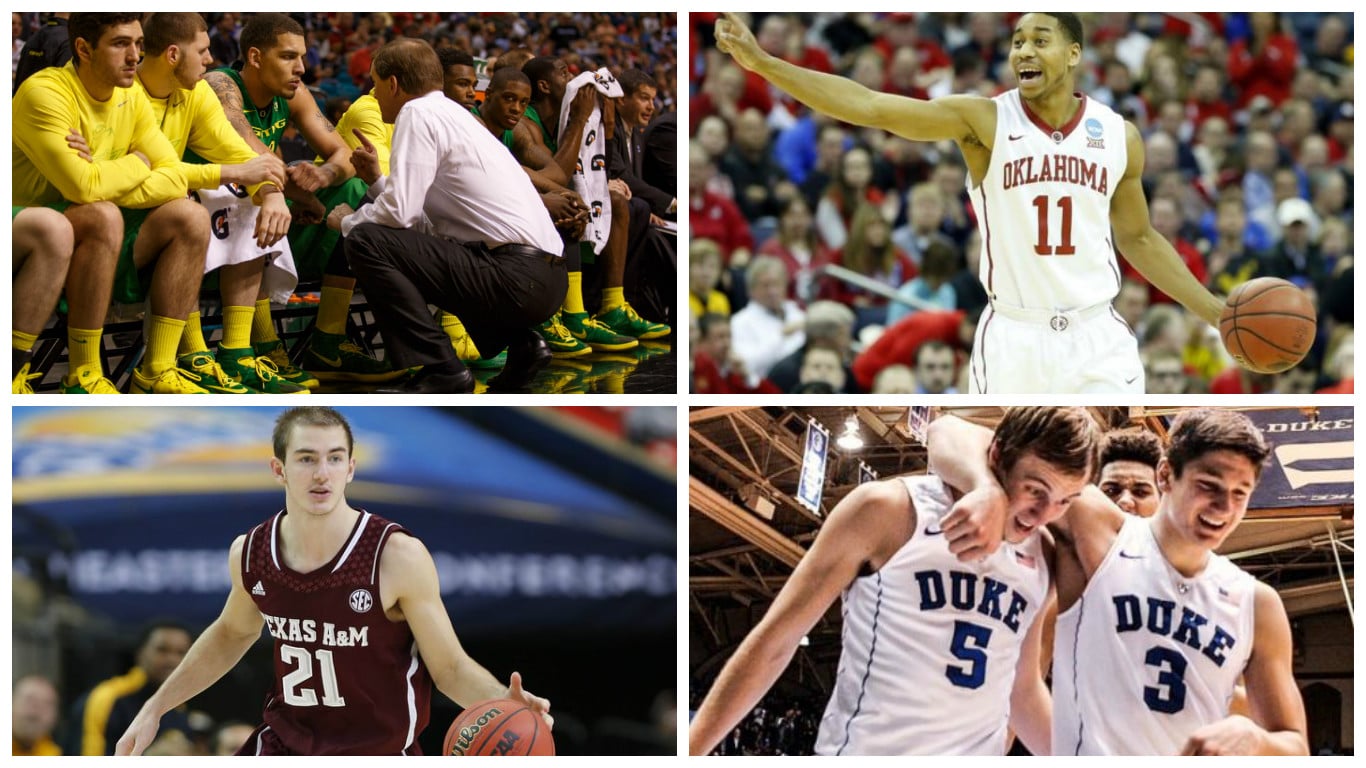 The Jayhawks had an easy time with Austin Peay and got out to a huge lead against UCONN in the second game. Kansas is balanced and has the depth to make it to the Final Four. It will be a tough game against Maryland but the Kansas big men definitely have the advantage.

Here is a zone set play used by Kansas against UCONN in the Round of 32. Perry Ellis does a good job moving around to an open spot in the middle of the zone. Once Ellis gets the ball, the middle defender steps up leaving Lucas wide open at the rim.

Maryland got some fight out of the South Dakota State Jackrabbits in the first round, but had an easier time with Hawaii in the second round. Maryland has a lot to play for, and Trimble and Sulaimon will want to prove themselves as a better combo than Mason and Selden.

Maryland used this play against Hawaii and creates several opportunities with the play. The first look is to drive following the shallow cut, second is to hit the post on the cross screen, and third is to hit the guard on the down screen.

Villanova has shown dominance in both games so far. I don’t think anyone expected the Wildcats to handle Iowa so easily. Villanova is shooting well and turning defense to offense with easy baskets in transition.

Here is a horns set play called by Jay Wright against Iowa in the Round of 32. The Wildcats pop the ball-screen and dive the opposite post. If the ball is reversed, 4 follows to set a ball-screen.

Miami faced a good Buffalo team in the first round, and had an impressive game against Wichita State in the second. The Hurricanes, led by Angel Rodriguez, got out to a huge lead on the Shockers and were able to hold them off.

Miami used this play against Wichita State to get an open lob at the rim. The wheel action cleared out the lane opening up the lob pass.

Oregon beat up on the Holy Cross Crusaders and then held off a late run by Saint Joseph’s in the second round. Even with poor shooting numbers, the Ducks got a ton of production out of Dillon Brooks. It feels like Oregon has enough guys to get them through slumps.

Lob play used by Oregon in the Round of 32. The lob wasn’t there, so the Ducks went straight into a ball-screen at the pinch post.

Duke had two relatively close games games, first beating UNC Wilmington and then getting out to a big lead against Yale before the Bulldogs stormed back outscoring Duke by 16 in the second half. However, it was just enough for Coach K and his Blue Devils to reach another Sweet 16. Oregon feels like the underdog in this matchup…

Duke used this set multiple times against Yale to get Brandon Ingram the ball at the high post. The guard in the corner then runs right clearing the left side for Ingram to drive.

Texas A&M beat Green Bay in the first round, and were 44 seconds away from losing to Northern Iowa when they pulled off the craziest comeback I have ever witnessed. The Aggies went on a 14-2 run to send the game to overtime, and the momentum was on their side as they pulled out the win in double overtime.

Horns set used in overtime against Northern Iowa. The Aggie player missed the layup, but the set is great to get a hi/lo pass for a layup.

Here is a set play used late in the first half against VCU. The Sooners get to a ball-screen by first setting a screen on the big who runs out to set the ball-screen. If nothing is there on the ball-screen, the Sooners ran run a handoff to the wing.