The Brad Underwood Oklahoma State Univeristy Cowboys are starting to meet their new Head Coach. This Bling Pig Set Play was used in the first round victory over West Virigina and Bob Huggins. It’s a great set play that has a lot of success in their system.

Just a day after his Stephen F. Austin team lost to Notre Dame in the second round of the NCAA Tournament on a lucky tip-in, he accepted the job as Oklahoma State’s basketball coach. Coach Underwood has stated that Oklahoma State University is his deam job as well as Gallagher-Iba Arena. We are talking about a coach that has Henry Iba bloodlines in Jack Hartman.

The Brad Underwood Oklahoma State University Cowboods will get back to playing like they did in the Iba and Sutton days. They will play hard-nosed, tough man to man defense like Eddie Sutton’s teams played, and by ensuring hard work every practice that expects will carry over into games. He told the players in a team meeting, losing is not an option that we are going to work.

In his three years at Stephen F. Austin, Brad Underwood had a 89-14 record and set a program record with an .864 winning percentage. Oklahoma State University Athletic Director made a quick hire, because he knew that Underwood’s phone will be blowing up with interested schools. This was their number one target and they got him.

The Brad Underwood Oklahoma State University Cowboys will have a team of solid building blocks in Guar Phil Forte, who had a elbow injury early this year and missed most of the games. He decided to come back to Oklahoma State. Jawun Evans, one of the top freshman in the nation this season, will also return after missing the last part of the season with a shoulder injury.
Evans scored 42 points against Oklahoma, a school record for a freshman. Forte said Evans played a role in his choice to return to Oklahoma State.

Coach Underwood thinks that there are enough good players already on campus to make the team immediately competitive. They have some experience coming back and that is always good.

If you like this set play then check out this playbook: 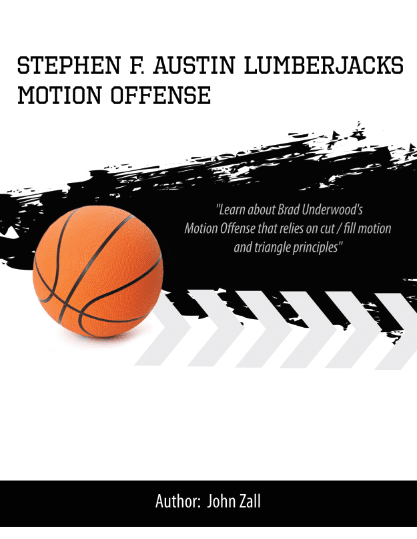 One of the best coaches in college basketball that you’ve never heard of resides in Nacogdoches, Texas. Brad Underwood has been the Head Coach of the Stephen F. Austin Lumberjacks for the past 3 seasons and has experienced unparalleled success. Prior to his opening round game in the 2016 NCAA Tournament against his old boss Bob Huggins and West Virginia Underwood posted an astounding record of 88-13. Those 3 years at Stephen F. Austin have also produced a 53-1 conference record and 2 undefeated conference regular seasons. The Lumberjacks have qualified for the NCAA Tournament all 3 years Underwood has been in charge.

The success at Stephen F. Austin has been spearheaded by their offense. If you’re looking for consistency, the Lumberjacks have scored at a rate of 1.15 points-per-possession, per basketballreference.com, for all of his 3 seasons at as Head Coach. This rate was good for national ranks of 12th, 13th and 15th respectively.

Their offense centers around a simple motion offense that can be taught at all levels of basketball. The Lumberjacks use precise cuts, hard screens and selfless passing to open players to overwhelm their opponents.

This playbook covers Underwood’s main motion offense and all of the counters he uses to run off of it. You can learn it all within minutes and can start implementing it to your team immediately. The offense relies on position less players who have high IQ’s and a deep understanding of how the offense works. No matter how the defense is playing, this offense always has a counter that you can go to in order to get an open shot.

Brad Underwood’s Motion Offense Playbook also features a variety of baseline out-of-bounds sets that will yield easy baskets or can seamlessly transition into the main motion offense. This is by far the most adaptable offense that can be taught and learned by basketball players of all ages. You can make your offense as potent as the one at Stephen F. Austin.