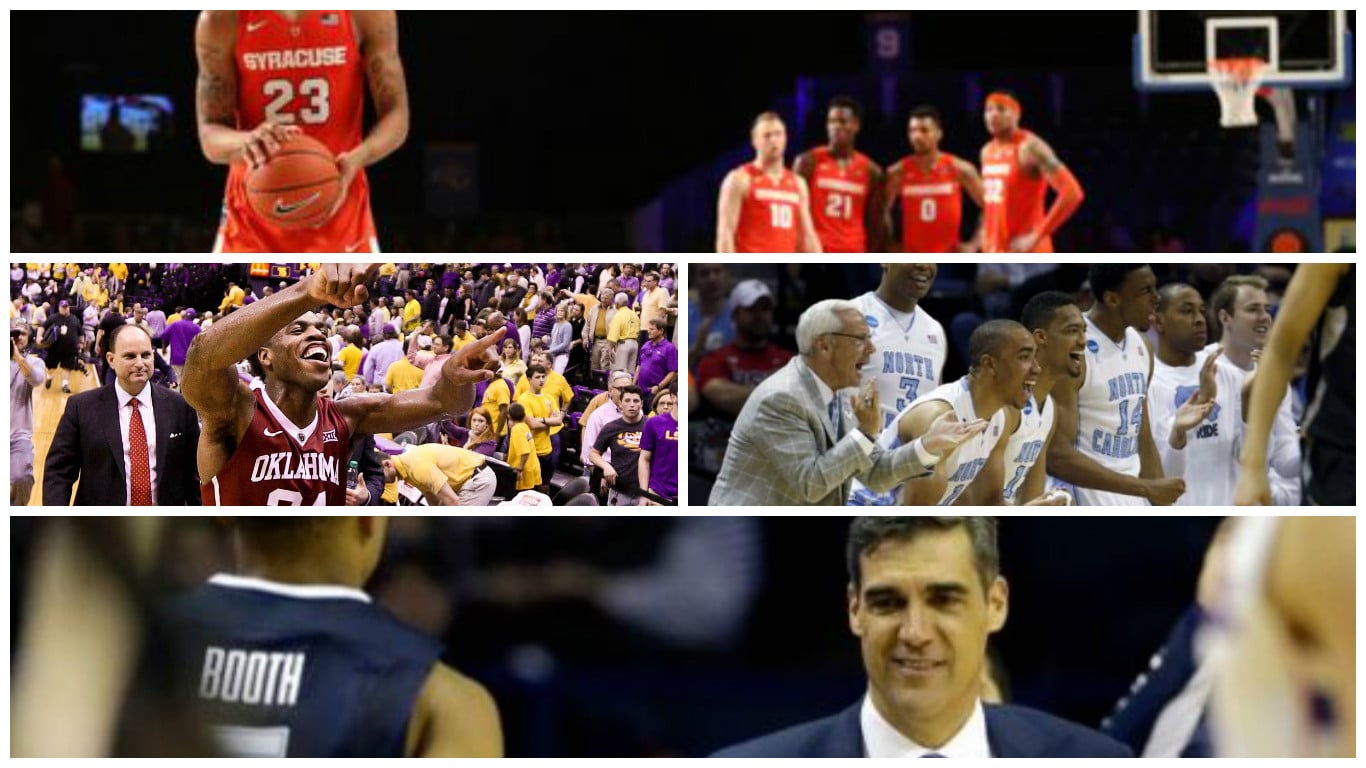 Of the four teams that made it to Houston, we have two ACC teams, one Big 12 team, and one Big East team. Both semifinal games will feature rematches from the regular season. Oklahoma beat Villanova by 23 points back in December in the Pearl Harbor game. North Carolina beat Syracuse by 11 points back in January and by 5 points in February. North Carolina seems to be the favorite, as they are the only #1 seed remaining, but when it is down to just four teams anything can happen. We are also down to four great coaches, which makes this a great weekend for coaches across the world looking for championship plays and schemes. In this article, we take a look at the NCAA Final Four teams and how each one punched a ticket to Houston.

North Carolina is the favorite going in to the Final Four. The Tarheels are the only #1 seed remaining in the tournament, with Kansas, Virginia, and Oregon losing in the Elite 8. North Carolina beat Florida Gulf Coast, Providence, Indiana, and Notre Dame to get to the Final Four (with none of the games being very close). Marcus Paige is shooting well, and they have a great balance of guard play, size, and speed.

In this video, you will see several actions out of Carolina’s secondary break. The playbook also includes the basic break and a lob option out of it.

Syracuse has surprised everyone (probably even Jim Boeheim) getting this far. The Orange almost missed out on the tournament, but have made the most out of getting in. Syracuse played Dayton to start the tournament, then beat Middle Tennessee State (who upset Michigan State), Gonzaga (who upset Seton Hall and Utah), and finished the job with a big comeback win over Virginia in the Elite 8.

In the video preview, you will see the basic actions used by Jim Boeheim in the Elite 8 game against Virginia. Syracuse went to their Double Down Action or “Down Screen Motion” to pull the Virginia defenders out of the lane. Syracuse has a lot of talent with their wings (Gbinije and Richardson) and allow them to work freely with this set. The guards basically work off down screens over and over again until they can create a shot. In earlier games, Syracuse ran their “23 Orange Offense” as seen in this Syracuse Offense preview. The move to this down screen offense was smart, as it took the Cavaliers out of their pack-line principles and forced them to guard on the perimeter.

Villanova finally got out of the first weekend, and decided to get out of the second weekend too. The Wildcats have played their best basketball of the season in the tournament, with big wins over UNC-Asheville, Iowa, and Miami. Jay Wright and his team controlled the game against Kansas as well, the overall #1 seed in the tournament. Villanova, as always, has great guards, but this year they also have size and strength inside. Kansas had been controlling teams inside all season, but the Nova bigs won the battle in the Elite 8 game.

This is Jay Wright’s second appearance in the NCAA Final Four, with the first coming in 2009. Since 2009, the Wildcats lost in the first round twice, the Round of 32 three times, and didn’t make the tournament in 2012.

In this video preview, there are several options out of Villanova’s horns series. Jay Wright has been using Horns sets all tournament long, and against Kansas they had a ton of success with the “Roll Pop” action. The Wildcats were able to score with hitting the roll, setting a weak side ball screen, and using a “chop action” to drive into the help side defense.

Oklahoma has been one of the best teams in college basketball all season. The Sooners are loaded with talent (Buddy Hield and Isaiah Cousins especially), but the strength of the Sooners lies in their consistency. In the last 3 seasons at OU, Lon Kruger has been able to start the same starting lineup the entire season (not the same lineup for 3 years, but each year the same lineup throughout the season). Hield and Spangler have been a huge part of the balance for Oklahoma. The Sooners beaet CSU-Bakersfield, VCU, Texas A&M, and Oregon to get to this point. In each game, whether Buddy was playing well or not, they found a way to make a run and win the game.

Lon Kruger is now in his second Final Four. His first appearance was in 1994 with Florida. He is one of two NCAA coaches to take five different teams to the NCAA Tournament (Tubby Smith becoming the second one this season). The five programs that Kruger has taken to the tournament are Kansas State, Florida, Illinois, UNLV, and Oklahoma. He is the only coach in Division 1 history to win an NCAA Tournament game with five different programs.

In this video, there are several plays that Oklahoma used to beat Oregon in the Elite 8. Oregon played some of their match-up zone, and Oklahoma had some success running some man-type sets against it. The Sooners used high ball screens against Oregon’s zone and man defenses. At the end of the video, you see a lot of “Buddy’s Magic”, which the Sooners will rely on to win the tournament. This is what has made the Sooners so fun to watch all season long.