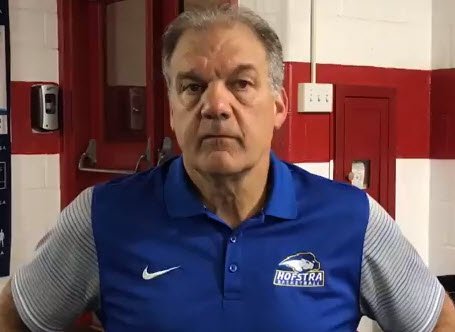 Basketball Plays | Sideline out of bounds

Here is the one of the Basketball Late Game Situations that you could have:   You have the ball side out, down 3, less than 5 seconds to go…what are you running to get yourself a quality look to send the game to overtime?

That’s the position Hofstra found itself in on Friday night at home against James Madison. They trailed 69-72 with 4.3 seconds left in regulation. Coach Joe Mihalich drew up a play in the timeout. The inbounds pass was caught in the far corner off a flare screen and then kicked out to Justin Wright-Foreman for a great look on the wing. They made a three-point shot at the buzzer sent the game into overtime where Hofstra went on to win 87-81.

The win moved Hofstra to 9-6 overall and 2-1 in the Colonial Athletic Association.

This type of win for Hofstra could have a significant impact on their season moving forward. A loss to James Madison, who is 4-12 on the year, would have put Hofstra under .500 in the conference. Instead, they picked up a win and changed the moving direction of the team.

There is such a small margin between winning and losing. It is imperative that teams prepare themselves for basketball late game situations. Whether it is full court, SLOB, BLOB, up/down, or a variety of time left on the clock- teams need to be prepared and have a plan. Not being organized can cost you an excellent opportunity to get a win. Hofstra was prepared and executed the plan perfectly and meant the difference between winning and losing.

Basketball special situations came come from beginning to end, and the team that’s better prepared for each one is often the victor. Joe Mihalich brings a wealth of wisdom and experience that will help you not only prepare for those basketball Late Game Situations, but you will learn how to install options to counter adjustments. Joe Mihalich digs into his bag of tricks and lays out trade secrets from some of the most creative coaches in today’s game.

Coach Joe Mihalich says that you should consider all the special situations in your off-season preparation for your team. You need to work on your situations once a week to maximize your team’s success. You need to set down with your staff to cover all the aspects of the game. Make sure that you have a plan in place when the time arises in the game.

You will want to cover all the critical moments in the game. Coach Joe Mihalich shows you one of the many ways to dominate Basketball Late Game Situations with concepts, and strategies.