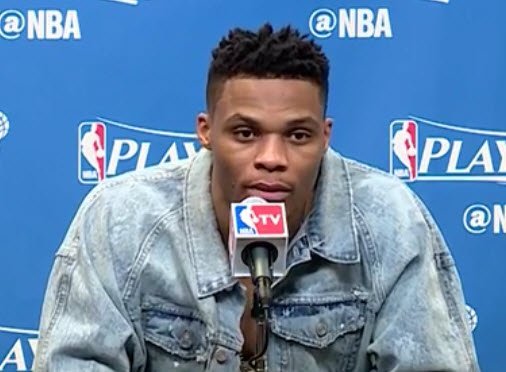 The Russell Westbrook NBA Scoring Drills are a great collection of NBA skill developement drills that your guards can be doing to get better. It’s something that you should add to you guard skill development this week.

There is nobody in sports that gets the reactions that Russell Westbrook does from basketball people. Sometimes it’s disgust, other times it’s pure delight, and mostly it’s just awe.

The whole OKC Thunder season has been everything that was crazy about this team. Now it’s cranked up big-time. Kevin Durant doesn’t get the ball enough? Well that is still true and now Durant might leave. They traded James Harden and now they have Dion Waiters playing the role of Harden. Scotty Brooks has been replaced by a rookie NBA coach in Billy Donovan that has spent all season making the same mistakes, but with less authority over Westbrook and Durant than Scotty Brooks had. Instead of Serge Ibaka, they are using Enes Kanter, and Westbrook is both better than ever and more radioactive than ever.

Russell Westbrook started the game with six turnovers in the first two quarters and the OKC Thunder were down five points at the half. The shot that I remember is the one where Westbrook pulls up 30 feet from the basket to drain a three at the end of a wasted possession. Durant then drained a three point shot and they were tied with the Spurs. At any moment, the OKC Thunder can be in this series just like that.

If Russell Westbrook can control his game without losing what makes him great then the OKC Thunder will win this NBA series with the San Antonio Spurs. It’s maddening and exhilarating all at once to watch the energy that Westbrook plays with durin the game.

Kevin Durant is a wonderful and close to unstoppable scorer as any this side of Steph Curry, but Russell Westbrook is the OKC Thunder’s heartbeat. You could tell it in game 5.

Want to have handles like Steph Curry? You need to put in a lot of time and practice, but this ball-handling routine...

[Update: Ball Handling Drills Notes and Diagrams Added in the end of the article] Having trouble handling the ball...