Kevin Durant has not talked a lot about his impending free agency. Durant will hit the open market for the first time in his career when the Oklahoma City Thunder’s season is over and the 27 year old will be the most coveted player available by a mile.

Kevin Durant will have no shortage of suitors who are just a few moves away from clearing max cap space. One of those teams that have reported as of friday was the San Antonio Spurs.

Could the San Antonio pull the ultimate coup by stopping the Oklahoma city’s playoff run and then steal away Durant in the summer? That possibility is definitely on the table. 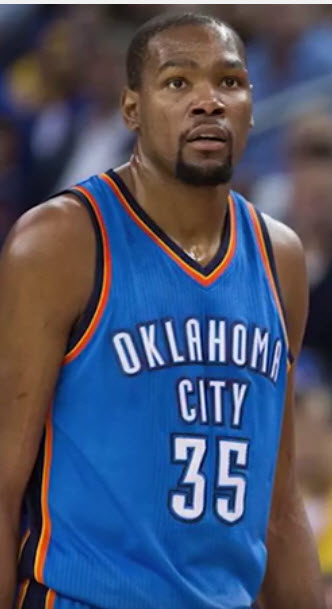 Who wouldn’t want to play in San Antonio? Gregg Popovich’s Spurs are the the most respected NBA Franchise in the league, Durant is getting an up close look at the dominant machine that is the Spurs in the playoffs.

The Spurs have a couple things working against them too: Durant will have a lot of people chasing him. That includes the Golden State Warriors, the big market Los Angles Lakers and everyone else.

We will just have to see what Kevin Durant decides to do this summer. I think that he will probably stay and sign a one year contract with the OKC Thunder.