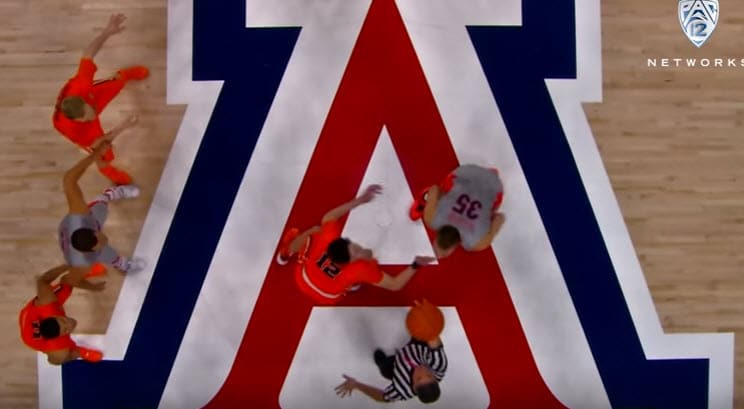 Sean Miler is the Arizona Wildcats Basketball Head Coach; 2014 Pac-10 Coach of the Year – 2x Pac-12 Coach of the Year; 2014 Pac-12 Champions – 2x Pac 12 Champs; former Head Coach at Xavier, 3x A-10 champions; and 2008 A-10 Coach of the Year. Here is Sean Miller’s take on the Arizona Wildcats Basketball Zone Offense. You will learn his five principles for beating zone defense. He will teach you how to beat the defense down the floor with Coach Sean Miller’s Phoenix secondary break which happens you run off a missed a shot. He runs the Carolina Secondary Break when they make the shot.

You will learn to identify and play to your team’s strengths. He will teach you how to identify and take advantage of your opponent’s weaknesses. When you force the defense to sprint back, Coach Sean Miller will show you his wheel, wheel flare, and flash actions to get great shots in the half court. The Arizona Wildcats basketball zone offense use a series of plays that each have an original action and a counter look to keeping the defense guessing. You will learn how to combine Sean Miller’s transition offenses and his half court set plays into one terrific zone offense. The Arizona Wildcat basketball zone offense is simple to implement and very hard to stop for your opponent.

If you play up-tempo and play to your team’s strengths, you will find out that you can identify your opponent’s weaknesses on the court. It will help you score against any zone with these actions and principles. I think that you will love these Sean Miller Arizona Wildcats Basketball Clinic Notes from the 2014 Nike Tunica Basketball Clinic. Coach Sean Miller is one of the best coaches in the nation just like his team.

Rawle Alkins had a press conference to announce that he will be coming back to Tucson for one more year. Coach Miller has kept in touch with him, and they know the things that the NBA Scouts want him to work concerning his game.

The NBA loves that he can play multiple positions and is a versatile player. They think that he is position-less right now.

Coach Miller wants him to work on being one of the leaders of the Arizona Wildcats Basketball team. Coach Miller liked that they tested the NBA waters to see where he was at with the NBA draft.

Coach Miller believes that it has made Rawle even hungrier to get better for next year. That’s a great thing for a returning player to be hungry.

The NBA Scouts told Rawle that he needed to work on his jumper and his body fat percentage. If the kid can get a consistent jump shot, then he will be almost unstoppable. He has said that he is going to shoot a thousand jumpers daily to improve his game.

Alkins also needs to lose some body fat, because he came in at eleven percent body fat. It’s not unhealthy or uncommon. Draymond Green had that body fat at the NBA draft, but he dropped because of it.

If you liked these Sean Miller Clinic Notes then check out another set of clinic notes: