Coach Alvin Gentry is the newly appointed head coach of the New Orleans Pelicans. He was the offensive coordinator last season on Steve Kerr’s staff for the championship winning Golden State Warriors. He has also served on Doc River’s coaching staff and with his offensive expertise he was able to turn the Los Angeles Clippers into a potent and consistent offensive squad. With over 27 years of coaching experience and having worked with some of the greatest coaching minds in the game such Larry Brown, Gregg Popovich and Doug Collins, Alvin Gentry is now one of the utmost respected coaches in the game today in particularly on the offensive end of the floor. Coach Gentry will be using many of the concepts shown in this mini playbook with in his new coaching role with superstar talent Anthony Davis at its core.

Alvin Gentry Transition Offense: 1 Pop
The first set “1 Pop” is an action which was run frequently out of Golden State’s transition last season involving Steph Curry at the point which allowed him to utilise a ball screen to attack and make a play. With his ability to shoot the 3-point shot off the dribble this was a very tough action to guard for defensive teams in particularly with shooters spreading the floor. 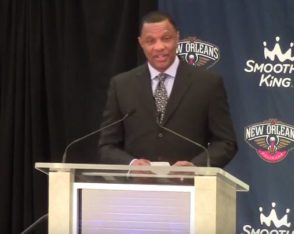 Alvin Gentry Transition Offense: 21 Series
The second action “21” – borrowed from Mike D’Antoni – involves a ball screen by the wing (Klay Thompson on Curry). The flare screen action followed by a ball screen by the big makes it tough for the defense to cover the pick and roll.

Alvin Gentry Transition Offense: A variation to this is “21 Chase” – the different being that the point guard pitches ahead to the wing then chases his pass for a quick hand-off. The point guard can attack quickly off the hand-off, hit the wing flaring off the big’s screen or run a side pick and roll with the trailing big (after big setting a flare screen for the shooter).

Alvin Gentry Transition Offense: Thru Series
Another common action out of transition is “Thru” designed for a playmaking point guard to attack off the dribble and make a read of the defence. A counter to this is “Thru Rip” designed for a quick lob for the wing. This then flows into a side pick and roll and half-court offense.

Alvin Gentry Transition Offense: Slice Series
This action utilises a slice screen for the wing – setting up a post-up opportunity. Golden State Warriors ran this action primarily for Shaun Livingston to take advantage of his size in the post vs smaller perimeter defenders. Weak side defence is also occupied by the staggered screening action making it tougher to double team the post effectively and help on shooters at the same time.

Alvin Gentry Transition Offense: A counter to this – which Golden State would run for Draymond Green – is “Slice 4” to take advantage of a stretch shooting the 3-point shot.
We will see many of these concepts implemented and run by the New Orleans Pelicans in the up-coming NBA season. I hope you find this mini-playbook useful for your team in your upcoming season.