Attached in this playbook are three set plays from New Orleans Pelicans head coach Alvin Gentry. Gentry is in his first year with the Pelicans after serving as an assistant coach for the NBA Champion Golden State Warriors last season. Gentry also has been an assistant coach for the Clippers, Suns, Spurs, Pistons, and Heat. He also has been an NBA Head Coach for each of those teams except the Spurs. Before getting into the NBA, Gentry was an assistant for the Kansas Jayhawks, Colorado Buffaloes, and the Baylor Bears. This season, the Pelicans are off to a slow start, but with several players injured it’s not clear how good New Orleans can be this season. Gentry can bring a lot of experience from his many stops, and if he can bring something over from Golden State’s offensive attack then Anthony Davis and the Pelicans are going to be a contender in the West.

Alvin Gentry New Orleans Pelicans Set Plays – Horns Overload
3 cuts to the opposite side of the floor as 1 passes the ball to 4. 1 then loops around to the wing as 5 and 3 set a staggered screen for 2. 3 then curls around the screen from 5 into the lane.

Alvin Gentry New Orleans Pelicans Set Plays – Stagger ISO for Anthony Davis
5 and 4 set a staggered ball-screen for 1 on the left wing. 1 drives middle as 5 rolls and 4 pops to the wing. 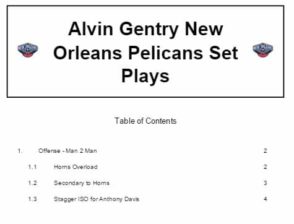