After Timeout Sets for Your Next Huddle 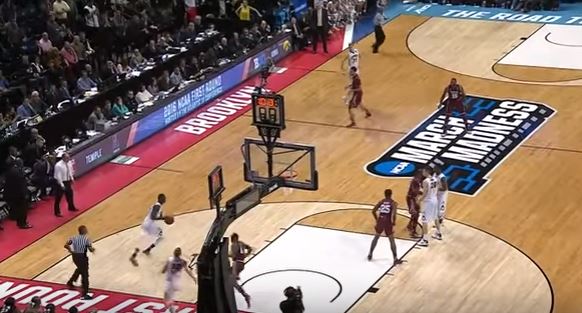 After Timeout Sets for Your Next Huddle by Wes Kosel

This article features four after timeout sets used by various NCAA and International teams. Timeouts can be a great time to draw up a play or make an adjustment to your offense. These plays were used by the Butler Bulldogs, Latvia National Team, Iowa Hawkeyes, and Texas Longhorns. Especially in the college game (where there are media timeouts), coaches have numerous opportunities in a game to use after timeout sets. Some teams will be able to handle new plays easier than others. If you have a predominately young team, stick to simple variations from your offensive playbook. Teams with savvy senior leaders can get a little more creative in the huddle. 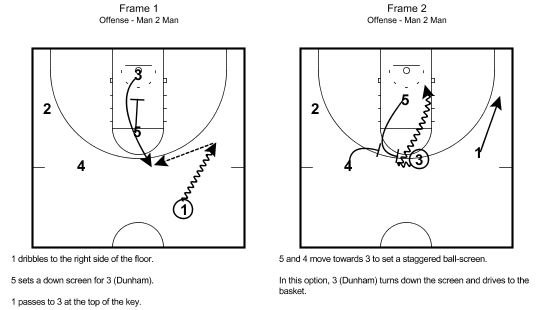 Latvia gets a quick shot off of this SLOB elevator play. 1 passes the ball in and gets it right back from 4. 4 and 5 then set an elevator screen for 2 cutting from the corner. 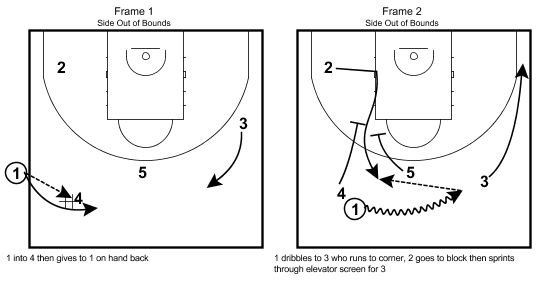 2 runs the baseline to loop off of a staggered screen from 3 and 4. 5 sets up to allow 1 to dribble towards the action. With all of the defenders occupied, 1 can look to turn down the screen if the space is there.

The ball is swung to the left wing. 1 then cuts through to the corner and 2 cuts off of a screen from 4. Once 1 has the ball in the corner, 5 steps out to screen for 3 on the wing. If nothing is there, 5 follows with a ball screen in the corner.

After Timeout Sets by Wes Kosel