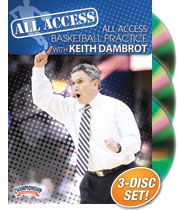 with Keith Dambrot, University of Akron Head Coach;
Keith Dambrot has led the Akron Zips for 10 years and has amassed over 230 wins guiding the Zips to 2 NCAA Tournament appearances, 3 NIT appearances, and 2 CBI appearances. He has consistently put out winning teams year after year.

In this All Access practice DVD, Coach Keith Dambrot shares his secrets to building a successful, sustainable collegiate program. Rarely do you get to see so many multiple sets and actions in one product. Among other things, you get a detailed look at the Zip Ball Screen Offense that has made Coach Dambrot’s teams perennial powerhouses.

Disc 1:
Coach Dambrot breaks down his man-to-man defense into drills that emphasize the foundation of his philosophy. Practice focuses on perfecting individual defensive techniques such as stance, on-ball defense, denying passes, and closeouts. The segment also shows how to build on larger team concepts such as defending the dribble weave, helping on dribble penetration, and Akron’s famous 1-2-1-1 “diamond” full-court pressure defense. The drills result in a high number of reps in minimal practice time. The practice also incorporates 2v2 and 3v3 defensive drills in both the half-court and full-court that focus on effort, intensity and game-like situations such as providing help, guarding the post, defending dribble actions, and more.

The end-of-practice segment includes multiple offensive plays and action series that can be run against the man-to-man defense. The Knicks series spreads the floor with movement and screening that puts pressure on the defense to cover. It’s explained and demonstrated on all three days of practice, 5v0 and 5v5. On Day 1, the team also runs their Xavier series and 3-in offense.

Disc 2:
Coach Dambrot picks up right where he left off by teaching how to defend the ball screen. In this defensive-focused practice, players demonstrate a series of breakdown drills to beat down screens, flare screens, stagger screens, and ball screens. Team defensive concepts such as communication, positioning, and defending the post through denial and double teams are also emphasized in the 5-on-4 full-court drill and shell drill. Akron’s four-man shell defense builds off this traditional drill with an emphasis on positioning and correct technique. Then a fifth player is added and the team focuses on digging and doubling the opposing post player after a post entry pass. It also works on help rotation if the offense passes out of the double team, fronting the post player on the low block and providing help against the lob pass.

Coach Dambrot continues his presentation with various play options, including screening and dribble drive, in scrimmages against both man-to-man and the 2-3 zone defenses. You’ll also see the team apply and attack full-court pressure during scrimmages.

Disc 3:
The third disc features an Akron team practice in front of a coaching clinic auidence. The benefit here is Coach Dambrot’s highly detailed explanation to the members of the audience. Coach Dambrot leads his team through a series of defensive breakdown drills focusing on the technique involved in on-ball defense and great closeouts. He also shares his strategies for teaching how to defend various off-ball and on-ball screens.

In this practice session, he holds nothing back on the offensive end. From ball screen offense to quick hitters to zone defense to transition, you get it all. Coach Danbrot packs this segment with 5v5 and 5v0 offensive reviews. If you’re looking for a new offense series to implement into your program, look no further. You get:

Nevada Series – An offense with an emphasis on getting a high/low action with the post.
Knicks Series – A spread out movement series with a lot of spacing, cutting, and screens.
Twirl Series – A ball screen offense
Memphis Series – A dribble drive series
3-Inside Series – A power game against a man or zone defense that pounds the ball to the block to three post players. It has great offensive rebounding positioning.

If you’re looking for new offensive drills or an offensive series to add to your repertoire, this is a must-have presentation for you.