Attached in this playbook are five high set plays that we saw in conference play last season. A lot of teams like to use this formation in our league because it opens up the lane and brings the post up from the block to the free-throw area. This is especially helpful for teams that want to bring the big out to face up or shoot three point shots. In addition, this formation can be great for spacing using staggered screens, down screens, ball screens, and back door cuts.

1 passes to 4, cuts in, then pops out to get the ball back. 1 dribbles left sending 4 to the corner as 3 cuts along the baseline off of a screen from 5. 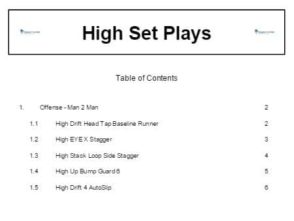