Here is a 4 out lob set play, similar to something that we ran when I was at Colorado College as an assistant. This play starts with four players out on the perimeter (wing, wing, slot, slot) and the 5 man inside posting up on the strong side block. 1 passes to 3 on the right wing and screens down for 4 at the top of the key. We called this a “tops” action. 4 cuts in then back out using the screen to get the ball at the top of the key. 4 can shoot the ball here if he has a shot, but if not he passes back to 3 on the right wing and 1 flips the screen to set a back screen for 4. 5 stays on the right block in this play, but often in our offense we would have 5 move opposite leaving space for 4 to make a cut to the rim after passing to 3. With 5 staying on the strong side, 4 can cut off of the back screen to the rim looking for a lob. Once teams start scouting this play and sucking in to guard the lob, 3 should start looking at 2 on the opposite wing for a shot. 3 should read x2 and make the pass off of his movement. With x2 coming in, 2 can move middle just slightly to create some more space between him and his defender making it more difficult for x2 to recover and closeout. 3 should give the lob a good look every time forcing x2 to make a decision. 3 can then skip to 2 for a shot, or if nothing is there pass to 1 stepping out after the screen. The offense can then continue with 2 posts inside, or you can have 4 cut out to the corner to keep the 4-out offense going. 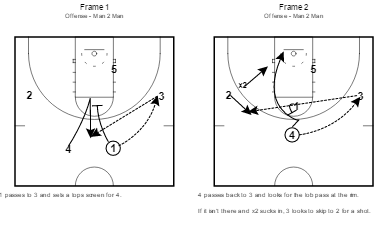