The 2015-16 NBA season should be an interesting one for the Los Angeles Lakers. Obviously the main focus will be on Kobe Bryant’s 20th and perhaps final year in the league, but the purple and gold also have a youthful and talented team around him this time around. The addition of second overall pick D’Angelo Russell along with the return of former Kentucky superstar Julius Randle will give the Lakers a new look on the offensive end. Los Angeles’ projected starting five also includes Jordan Clarkson and Roy Hibbert. With these lineup changes, we can expect to see different things on the offensive end this year. Today I want to share with you an offensive preview that I have put together by analysing the Lakers pre season games.

Under Byron Scott, the Los Angeles Lakers Offense mostly mix Princeton, Triangle, Floppy and Horns actions. Here are some of the sets that they ran many times.

Los Angeles Lakers Offense 3-1 drag screen: Many times out of transition, the Lakers will clear one side of the floor and bring Kobe (playing the 3 this year) up to ball screen the point guard. Here they are looking to give Kobe an advantage and isolate on the wing. Most of the time, this screen will force his man to help and he will roll and get good post position. Notice the 5 man (Roy Hibbert) is in perfect position for weak side offensive rebounding. 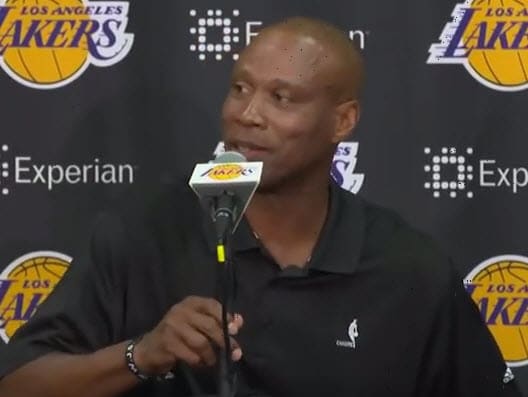 Los Angeles Lakers Offens Horns elbow: The Lakers love to play through the elbow series. In the pre season, they have mostly run this out of Horns. The point guard will feed one of the bigs on the high post and down screen for the man in the strong side corner (2 or 3). This player can curl to the rim, pop out for a jump shot or continue his cut and receive a handoff from the post player.
Triangle post entry: Coach Scott also utilizes the Triangle offense from time to time. Mostly when they run it, they will go to a strong side entry and they look for a post feed. When the wing passes the ball inside to the 5 man, both strong side players will clear. 3 will set a screen for 4 on the opposite side. The Lakers will use this option when they want to give Hibbert some touches and allow him to make plays from the low post.

Los Angeles Lakers Offense Princeton Chin Series: The majority of what I’ve seen the Lakers run was out of the Princeton offense. They run a number of different options within the offense along with quick hitters out of this set. I will present to you the options that I have seen them run repeatedly.

For a complete breakdown of the Princeton offense:

This first one is directly out of the chin series of the offense. 1 reverses the ball to 2 and uses 5 as a backscreen to the rim. 2 Immediately passes to the wing player. On this pass, the 5 man will set a flair screen for 2 and then pop outside to receive the ball. If 2 doesn’t have an option on the flair, he will curl to the basket. When the ball is passed to 5 on top, 3 and 4 will go downscreen and this turns into floppy action. Both guards will come off looking to score (Russell/Clarkson/Young/Williams) while 3 and 4 will look to get deep post position after their screens. This is a great option to get Kobe or Randle the ball close to the basket at the end of the clock. 5 can now pass to an open man or dribble pitch with one of the guards.

Los Angeles Lakers Offense Princeton Chest 15: The second option they run a lot out of Princeton is called Chest 15. After the ball is passed from 2 to 1, 2 will cut to the basket and fill one of the corners. Instead of passing the ball to the wing, the point guard will keep it and 5 will set a ball screen.

Los Angeles Lakers Offense Princeton pin down: The last option is one the Lakers utilized a lot in the first quarter against the Raptors. 1 dribbles towards 2 which triggers a basket cut. 2 will fill the opposite corner. 1 will pass the ball to the wing and cut to the opposite side. 5 will then turn to downscreen for 3 (Kobe). Notice that the strong side is cleared for Kobe so if he doesn’t have an open shot he can curl or back cut into the post and receive the ball.